During the British Colonial period, there was discussion of working with the government of what we now know as Thailand to create a railroad that connected the major tracks already in existence, allowing for faster travel across  to what was then Burma. These plans were abandoned, however, when the terrain was surveyed and the cost was realized.

Fast Forward to WWII, and the Japanese have now taken much of the surrounding areas, including the adjacent railroads that they too would like to connect. They see something to make it more cost effective, however, that the British had not considered using: POW and Slave labor. The results were what is now known as the Burma Death Railway.

Given that few Americans were put to work in this area, it is a chapter of world history I knew little about from my U.S. education. This changed when I travelled to Thailand in December of 2014 and was able to tour many of the areas around Kanchanaburi. Aside from the memorials and museums dedicated to that dark period, I was able to hike a specific section of the brutal railway path that came to be known as Hellfire Pass.

The details of that chapter of history were brutal and tragic. Allied POWs as well as conscripted labor from all across Asia were subjected to brutality and misery on a scale that is hard to imagine. Standing in the pass that had come to symbolize the railway to many, staring at the sharp rocks that workers were forced to traverse barefoot, looking at the places where large chunks of a mountainside were hand chiseled away by workers over the course of 18hr days while living on 600 calories of rice and sometimes rotten meat... it was an experience I will not soon forget.

The experience inspired the short story that I am publishing today. It is a bit darker than some of my other stories, as befitting the history that inspired it. I hope you enjoy it, and I hope it inspires at least some of you to learn more about these events. Like so much of our past, we cannot change it, but we can learn from it in hopes that we avoid repeating anything like it in the future. 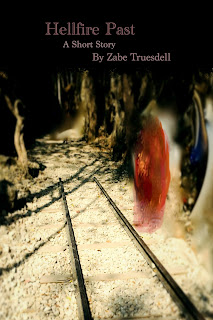 Hellfire Past is available today on Amazon and Smashwords. It will be available on all other e-book sellers this week.